A theme was selected to show the parallels between the culinary arts and alchemy. “Alchemy was the quest of the ancients to transform ordinary elements into gold.  In a similar way, our chefs endeavor to transform ordinary food ingredients into ‘gold’ every time they dazzle diners with their edible creations,” wrote Edmond A. DiAntonio, CMP, CPCE of the Walt Disney World Swan and Dolphin in Lake Buena Vista, Florida.

Despite the parallel between culinary arts and alchemy, it was obvious to guests – who were greeted with the Thomas Dolby tune from the 1980s, “She Blinded Me With Science” – that this was no laboratory experiment.

“While medieval alchemists applied science and magic, our chefs leverage new techniques, ingredients and flavors to reinvent their craft”, DiAntonio wrote in his nomination.

The choice of décor for the event was a given.  110 guests were welcomed into the venue, which was transformed into a science lab for the event. Colorful liquids bubbled in glass beakers, while racks held items that looked like science experiments. Servers wore white lab coats and pockets imprinted with the company’s name and “Flavor Lab.” The techno music was spun by a disheveled, white hair deejay.

Guests received food items passed on acrylic stands, which contained cones of assorted exotic appetizers. The menu was burned onto a tongue depressor, which was set at each place setting. All of the food represented the four major elements: water, fire, earth and air.  These elements were further reinforced by the colors and textures of the food selected, as well as the manner in which they were served.  For example, for water, sea blue plates were used. For fire, dry ice and fiery orange paprika gave an effect of a boiling mixture. Bowls made of stone set on wooden platters represented the earth element. And air was reinforced with the scent of peach perfume released when the server removed the sugar sculpture lid from each serving.

The party was located on the pool terrace, but as so often is the case, inclement weather changed everything. Just as the first course was about to be served, a thunderstorm forced everyone indoors.

Service staff and managers covered the tables and chairs with rolls of plastic. After 20 minutes, the storm ended. Dinner was delayed by only 40 minutes. “During the water element course, we joked about having already kicked off the water course,” DiAntonio recalled and then lightheartedly added, “The next course is fire and you should see what we have prepared for you!” 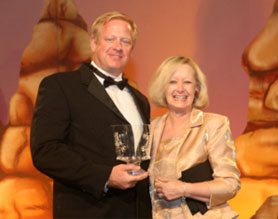